Domestic violence is a pattern of behaviour in which one intimate partner uses physical violence, coercion, threats, intimidation, isolation or emotional, sexual or economic abuse to control the other partner in the relationship. Domestic violence does not necessarily involve physical violence and it equally affects all aspects of our society, rich or poor, regardless of race, ethnicity, religion or national origin.

What is the difference between Common Couples Violence versus Domestic Violence Manifestations?

Sometimes it’s hard to know the difference between a row or argument which includes some physical aspect and domestic violence.

So let’s be very clear that there are legal definitions about what these terms involve.  And so this list sets out the core of each

So what about NZ and family violence?

“…….we also top the world at the rate in which we beat our partners and kids. We have the highest rates of family violence in the developed world.”

This is a shameful record.

Every five minutes police are called out to respond to abuse happening somewhere. Kids are present at two thirds of these incidents. Each year the number of family violence cases climbs.

Even after the bruises fade, the damage lives on.

Those who experience family violence go on to perpetuate the abuse on others. They are less likely to finish school and keep down a job, and are more likely to turn to drugs and alcohol, and end up homeless. They are three times more likely to attempt suicide.

When someone dies at the hands of another in this country, nearly half of these are family violence.”

Domestic violence is an epidemic everywhere.

In America one out of nearly every three women will be the victim of domestic violence in her lifetime. Between three and ten million children are exposed to domestic violence every year and that exposure has a negative impact on their development. Moreover, studies indicate that forty to sixty percent of men who abuse women also abuse children.

And It Isn’t All About Men as Perpetrators!

Approximately 1.3 million women and 835,000 men are physically assaulted by an intimate partner annually in the USA.

What is the impact of Domestic Violence on Separation/Divorce?

Domestic violence is the use of violence, threats of violence, or coercion to obtain and maintain power and control over another person.

The five central issues important in divorce are:

The capacity of a person experiencing domestic violence to participate fully in the divorce process may be compromised as follows:

If you are a victim of domestic violence or someone you know is please reach out immediately – to a friend, a family member, the police (dial 111), your Church Minister, your Doctor,  Women’s Refuge  or SHINE

Equal Exes can help you work out if you or your friend is suffering domestic violence.  Take our self-assessment quiz,  Read our free ebook Divorce/Separation, Domestic Violence and the Dollars. 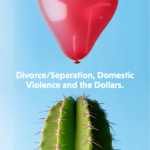